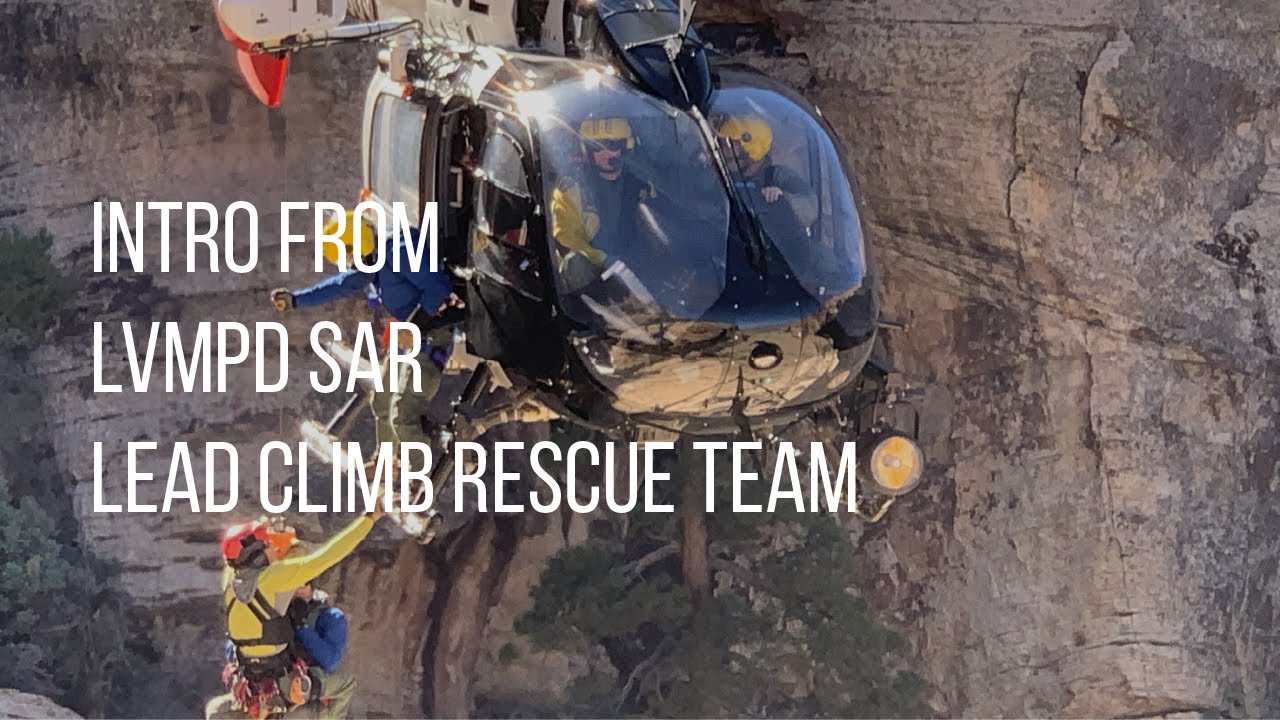 Joe Walton was downclimbing a fourth-class slab in the dark, 1,200 feet off the deck, when he slipped. At the time, there were three pieces of protection between him and his brother, who stood far below, at the other end of the rope.

Joe hit the rock in a skid, then a tumble, then a freefall as, one by one, his pieces failed. He couldn’t feel the gear exploding out of the soft sandstone, but he could tell by the length of the fall that there was nothing stopping him—nothing between him and the ground except 1,200 feet of empty air. As he plummeted through space, picking up speed, one thought fizzed to the surface: This is where I’m going to die.

At the time, the brothers were scrambling up the home stretch of Epinephrine (5.9), an ultraclassic multipitch climb in Red Rock Canyon just outside Las Vegas. Neither of them were inexperienced climbers, but they’d gotten stuck behind another party for much of the route. By the time the slow party topped out, the sun had started to set. The brothers realized they needed to pick up the pace if they wanted to get out before nightfall.

So, Joe took the lead, and the two started to simul-climb—a technique in which both climbers ascend at the same time. The leader clips the rope to pieces of protection in the rock, and the follower retrieves the protection as he goes past. Of course, this means there are usually just two or three pieces in the rock at any given time. Over a 30- to 40-meter length of rope, this isn’t much. It means that if the leader slips, he’s got a long way to fall before the rope comes taut.

Add that to the fact that simul-climbing is usually reserved for easy, low-angle, ledge-covered terrain, and it’s easy to imagine just how ugly simul-climbing falls can get. That brings us to the number-one rule of simul-climbing: Don’t slip. Of course, it was too late for that now. Ben Williams was at home when he got the call. Williams is a nurse, longtime climber, and volunteer member of the Las Vegas Metropolitan Police Department Search and Rescue lead-climbing team. When he picked up his phone at about 8:00 PM, he was surprised—the team did a lot of rescues on Epinephrine, but few this extreme.

At the time, the dispatchers had no idea how bad Joe’s injuries were—Ben wasn’t even sure if the guy was still alive. All he knew was that Joe had fallen a whopping 200 feet, in the dark, on a notoriously dangerous climb. Ben grabbed his gear. A few minutes later, he was in the parking lot at the base of the canyon, jumping into a helicopter with a commissioned officer and a few other rescuers. Their first order of business would be a fly-by to get an idea of what they were getting into.

That’s when things started to get interesting.

By now, it was completely dark, and the helicopter pilot was relying on night vision to navigate. Ben, the officer, and the others scanned the rock. The chopper veered into the canyon, sidling up as close to the wall as it dared to give the guys a closer look.

Right away, Ben could tell things didn’t look right. He could make out two figures on either end of the rope, but the cams and slings—the pieces of protection that should have caught the fall—were all scattered limply on the rock. The chopper hovered a little closer to check out the rope. Shock rippled through the group of rescuers.

One climber was hanging in space, and the other was huddled against the rock far below. Between them, the rope had come taut, alright, but not on a piece of gear. Instead, it had caught on a tiny nub of rock—the only thing standing between the two brothers and a 1,000-foot death fall. Ben Williams is an experienced climber and a longtime search and rescue volunteer. Photo courtesy of Ben Williams.

Immediately, the helicopter wheeled around, dropping Ben and the officer back at the parking lot. They grabbed a drill, some anchor bolts, and everything they would need to rappel down to the climbers and execute a highly technical rescue. By now, it was just a few minutes past 10:00 PM. Meanwhile, two other rescuers—lead-climbing team founder Simon Peck and a second officer—got their own kits ready. They’d be part of the second wave.

Within minutes, Ben was being lowered out of the helicopter onto a tiny, sloping ledge just above the nub of rock holding the rope. But navigating by night vision, the helicopter could only get so close. Ben swung back and forth, running sideways along the rock to improve his position and using hand signals to direct the pilot. He could feel his heart pounding the whole time—if he was lowered too far, he could bump the rope, sending both climbers to their deaths. If he wasn’t lowered far enough, he wouldn’t be able to reach their rope to secure it.

But after a few tries, Ben felt both feet touch the ledge. Got it. He motioned to the chopper, unclipped from the line, and drilled a two-bolt anchor into the sandstone while his partner began his descent.

As soon as Ben was securely clipped to the anchor he took a deep breath and lowered himself carefully down to the rock knob. He remembered looking at it in disbelief—it was small, barely incut enough to hold the Walton brothers’ rope in place. It shouldn’t have held for this long. But, somehow, it did. Simon Peck is one of the founding members of the Las Vegas Metropolitan Police Department Search and Rescue lead-climbing team. Photo courtesy of Ben Williams.

Ben clipped a sling to the anchor and bent down slowly, painstakingly, to clip the other end to the suspended rope. Ben, he remembers telling himself, this is the most important clip of your life.

Click. The carabiner closed around the rope, and Ben and the officer hurried to add several backups. Both of them could feel the first wave of relief—but they weren’t in the clear yet. There was no guarantee that the climbers’ rope hadn’t been critically damaged in the fall. And no guarantee that the fallen leader would live.

The two split up, Ben rappelling down to the injured patient, Joe, while the officer rappelled to Joe’s brother. Ben lowered slowly, moving his hand gently down the line to check for damage. So far, so good.

By the time Ben spotted Joe in the beam of his headlamp, he was surprised to see him alert, despite some evidence of shock, serious road rash, and two badly sprained ankles—not to mention hunger and cold from hanging in a harness for several hours. His helmet was cracked. He had a glazed-over look in his eyes. He looked like he’d been in a motorcycle crash.

Meanwhile, the two other rescuers had arrived at the ledge with a fresh supply of ropes and gear, and Walton’s brother was on his way to the anchor, where he’d be plucked off by a helicopter and flown to safety.

Simon, one of the new arrivals, rigged up a pulley system and rappelled down to Ben. Together, they made sure Joe was comfortable and hooked him into the pulley system. Then Simon climbed back the the ledge and weighted the line, using his own body as a counterweight to hoist Joe to the top. It was a modified technique Simon had learned to haul bags of food and supplies up multi-day routes on Yosemite’s El Capitan. And it worked like a charm.

Before long, Joe and Ben had arrived at the ledge and were awaiting the helicopter. By 11:50 PM, he was out. Rescuers practice hoisting a patient into a helicopter during a training scenario. Photo courtesy of Ben Williams.

The whole rescue—one of the most complex of the season— took only an hour and a half, a testament to just how efficient the Las Vegas Metropolitan Police Department Search and Rescue lead-climbing team is. Each member is a highly accomplished climber with a mind-blowing repertoire of rescue techniques and tricks from years of climbing, training, and dedicated practice. And the six-member team is responsible for the most complicated, technical climbing rescues that take place within the vast and extremely popular Red Rock Canyon.

Among those, Simon says, this mission was one of the most complex—and the most rewarding.

“Of all the hundreds of rescues I’ve been involved in over the last nine years, I can literally think of three that were real life-saves—situations where, if we had not been there, that person would not be walking around on the planet today,” he explains. “This was one of them.”

Since his rescue on Epinephrine, Joe Walton has made a full recovery. He’s now returned to climbing.

My heart is still pounding… I’m overwhelmed with gratitude for our LVMPD search and rescue climbing team. You are incredible… thank you for making a difference in the Red Rock community every single day.

This is such an inspiring story and brings me great comfort while I climb outside. I’m getting into solo lead climbing and always worry if an accident happens, I do have a garmin in reach, so I can call for help. Im thankful to know that this amazing team will be coming to my aid if something goes wrong. Thank you guys so much for your service!

Thank you for your service, LV Metro SAR you are the light at the end of the long desert night. All of us RR climbers owe you an enormous debt of gratitude. Where and how can we donate to support you?

Amazing and LV is lucky to have such a team and one that partners so effectively with the police.

Thank you so much for all you do, in this amazing rescue, and all the many others that are less dramatic yet equally appreciated by those of us who have needed you.

Amazing rescue! Thanks so much LVMPD Search & Rescue!

Keep up the great work!

I have the highest respect and gratitude for the LV Metro SAR. World class. Thank you!

Wow! You couldn’t give this award to a better group!