Tiptoeing Around Avalanches: Midnight Rescue in 10 Feet of New Snow

Tiptoeing Around Avalanches: Midnight Rescue in 10 Feet of New Snow 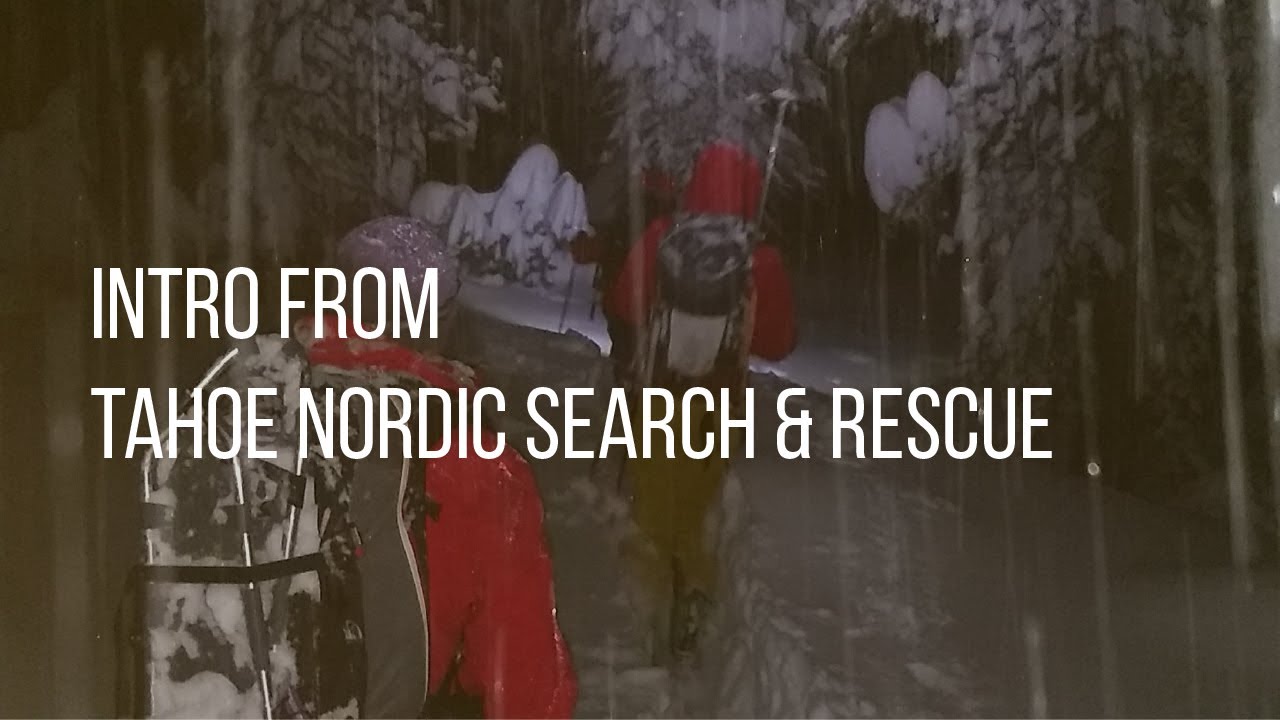 In late January, 2021, the high peaks around California’s Lake Tahoe received 10 feet of fresh snow in just three days. By the end of the storm cycle, avalanche conditions were nearing historic levels. In fact, the local avalanche forecast classified the hazard level as “EXTREME” the afternoon Officer Booth got lost.

An off-duty California Highway Patrol (CHP) officer and an experienced snowboarder, Booth had spent the day riding Sugar Bowl Resort with his son. After lunch, he split off on his own, hoping to get a few last laps in before the lifts closed. Snow poured from the sky, knocking visibility down to 20 feet. On his final run, he took a wrong turn, carving down into a ravine called Coldstream Canyon on the back side of the resort. By the time he realized he was lost, the snow was over six feet deep. Retracing his steps would be impossible.

Booth felt a sinking feeling. This could be bad. He grabbed his phone and managed to get a call out to emergency services. Then, in the growing darkness and deepening snow, he waited, and he wondered if he’d see his family again. The local backcountry rescue team, Tahoe Nordic Search and Rescue, started mobilizing. They had Booth’s coordinates, but with temperatures in the 20s and chest-deep snow lining the bottom of the canyon, they knew he could easily die of hypothermia—that is, if an avalanche didn’t get to him first.

Troy Corliss, a 15-year member of Tahoe Nordic SAR, got the call just after dinner. He grabbed his keys and hit the road.

As soon as he got to Sugar Bowl, Corliss started tracking down ski patrollers. He needed to talk avalanche conditions. The crux of this whole rescue, he knew, would be dodging the area’s innumerable steep slopes, all of which sat loaded under tons of new snow, a hair-trigger away from letting loose. The avalanche forecast the day of the rescue showed “EXTREME” level conditions at every elevation. Photo courtesy of Troy Corliss and Sierra Avalanche Center.

The patrollers listened to his questions. They shook their heads: They’d already tried to get to Booth, but weren’t able to find a safe route. They’d been seeing historic-level avalanche activity all day—slides big enough to force them to close much of the resort. In their opinion, there was no safe way to reach Booth by descending through Sugar Bowl. If the rescuers triggered a slide from above, they could bury him.

As other SAR volunteers began arriving, Corliss and the patrollers got out a map. Tahoe Nordic SAR specialized in complex winter rescues, especially in epic storms like this one, which frequent the Tahoe region of the Sierra Nevada. Since their founding in 1976, the team had responded to hundreds of rescues like this one.

So, the team was confident there had to be a safe route somewhere. Together, Corliss, the patrollers, and the other volunteers pored over the terrain and started hashing out a plan.

After examining options and weighing risks, they found something: a long, circuitous route around the north, linking up small ribbons of low-angle terrain that weren’t likely to slide. Going straight through the resort would have taken less than a mile. At five miles long, this new route would take hours even in good conditions. But the 10 feet of fresh snow had barely had time to settle. Step out on skis, and you’d sink three or four feet. Step off your skis, and you’d sink down to your eyebrows.

Still, eight skiers, including Corliss, stepped forward to form the overmountain team on the north route. Meanwhile, six others would start in a snowcat at the canyon bottom. If perilous conditions turned one team back, they figured, the other team would make it through.

Of course, both teams hoped the snowcat would be the one to get there first; if the job fell to the overmountain crew, they’d be in for a multi-day effort.

Loaded down with overnight packs, the overmountain stepped into their skis and set off to the north, breaking trail through chest-deep snow by headlamp. Meanwhile, the snowcat revved to life in the canyon bottom and started up, trailed by three snowmobilers. Dirk Schoonmaker was one of the rescuers in the cat. It didn’t them long to realize that, even with the machinery, they weren’t guaranteed to get anywhere close to the victim.

Schoonmaker watched out the window as the cat struggled. It was having to cut a four-feet-deep trench to make any progress, and the snow was too deep for the snowmobiles to get out in front. Still, it was good to have them there—the straining snowcat was devouring a huge amount of diesel. The snowmobiles zipped back and forth between town to shuttle fuel.

Then, after about 5 miles, the snowcat's progress started to stall. The crew was still a mile and a half from Booth’s coordinates, but the machines could go no further. The snowcat had to cut a four-feet-deep trench through the snow to make progress. Photo courtesy of Tahoe Nordic Search and Rescue.

So the skiers hopped out—and immediately sank down to their chests in the new snow. Eventually they were able to fight their way into their skis and start breaking trail.

As expected, the skiing was painfully slow. After an hour, they’d gone a quarter mile. After three, they’d gone a mile and a half. Finally, just before 1:00 AM, they entered the meadow where Booth’s coordinates were. Schoonmaker started yelling for him. Before long, they heard a faint voice call back through the darkness:

Meanwhile, up in the mountains, the overmountain team were picking their way slowly around snow-loaded slopes in the dark. Suddenly, they heard their radios crackle to life.

Corliss could feel the tension lift from the crew. Still, temperatures were well below freezing, and the rescue wasn’t over yet. They paused to rest and refuel amid the snow, just in case they were still needed. Back down in the canyon, the rescue skiers were giving Booth food and water. They warmed him up and strapped him into a pair of snowshoes. Slowly but surely, the rescuers walked him back to the snowcat and rode out the road they’d plowed. Meanwhile, they gave the overmountain team the all-clear: The mission was a success, and it was safe to go home.

But when the snowcat team turned into the parking lot, they found there was one last surprise.

The officer’s boss and two of his colleagues stood at the trailhead lot waiting for him. Booth sank down into his seat.

“I’m going to get so much crap for this,” he groaned. And sure enough, as soon as the door opened, the other officers ran over and started chewing him out.

“It was all in good humor, of course,” Schoonmaker chuckles. “They were just so relieved to see him. We all were. This was my 160th or 170th search. When you’re out there yelling, and you hear the person you’re looking for yell back? That’s one of the best feelings ever.”

Officer Booth later addressed Tahoe Nordic SAR at its regular team virtual meeting with an emotional thank you. The team also received letters of appreciation from Chief Dust, CHP Valley Division, and the Tahoe Basin Lieutenant with the Placer County Sheriff. Officer Booth was overjoyed to be reunited with his family. “The selfless actions and dedication of your team members is unmatched. I am forever in debt and thankful for Nordic Search and Rescue,” he says.

A story of uncommon courage, selflessness and ability. Thank you to this team for your remarkable bravery, dedication and example of placing other’s safety and needs before your own. I am also deeply moved and inspired by the role of my friend, Troy Corliss, who simply never fails to “shock and awe”.

Just one of the amazing rescues SAR has pulled off. Ask Dad (Larry Sevison or Doug Read – who started the team) how many rescues have happened since 1976. Huge hearts this team has to do this year after year. Amazing group!!!!

In unbelievable conditions, this team has to have the biggest hart and passion for saving lives. How they continue on is unprecedented.

Troy Corliss is a fantastic person, been a friend to my husband for over 40 years, and I’m sure he is just surrounded by great people who care so deeply about others that they are willing to risk their own to help. What a great story! Thanks for sharing!!

One of 9 rescues this year! Thank God for this team if dedicated experienced rescuers!

I remember reading the story after it just happened and now I am reading the details, what a great job the SAR Team did!

It’s an incredible story – and one of many! The Tahoe Nordic SAR team is amazing!